This book may be of interest to those who are curious about how I learned to create the layering process. Some of the main ideas are included on this page, but if you would like to buy the book, it is available in both printed and pdf form at Lulu.com:

I wrote this book in 2005. This was before 3D printers were commonly available, and so my latest devices are not covered.

Around the time when I was writing the book, I was making and selling the original Orgone Breeze: 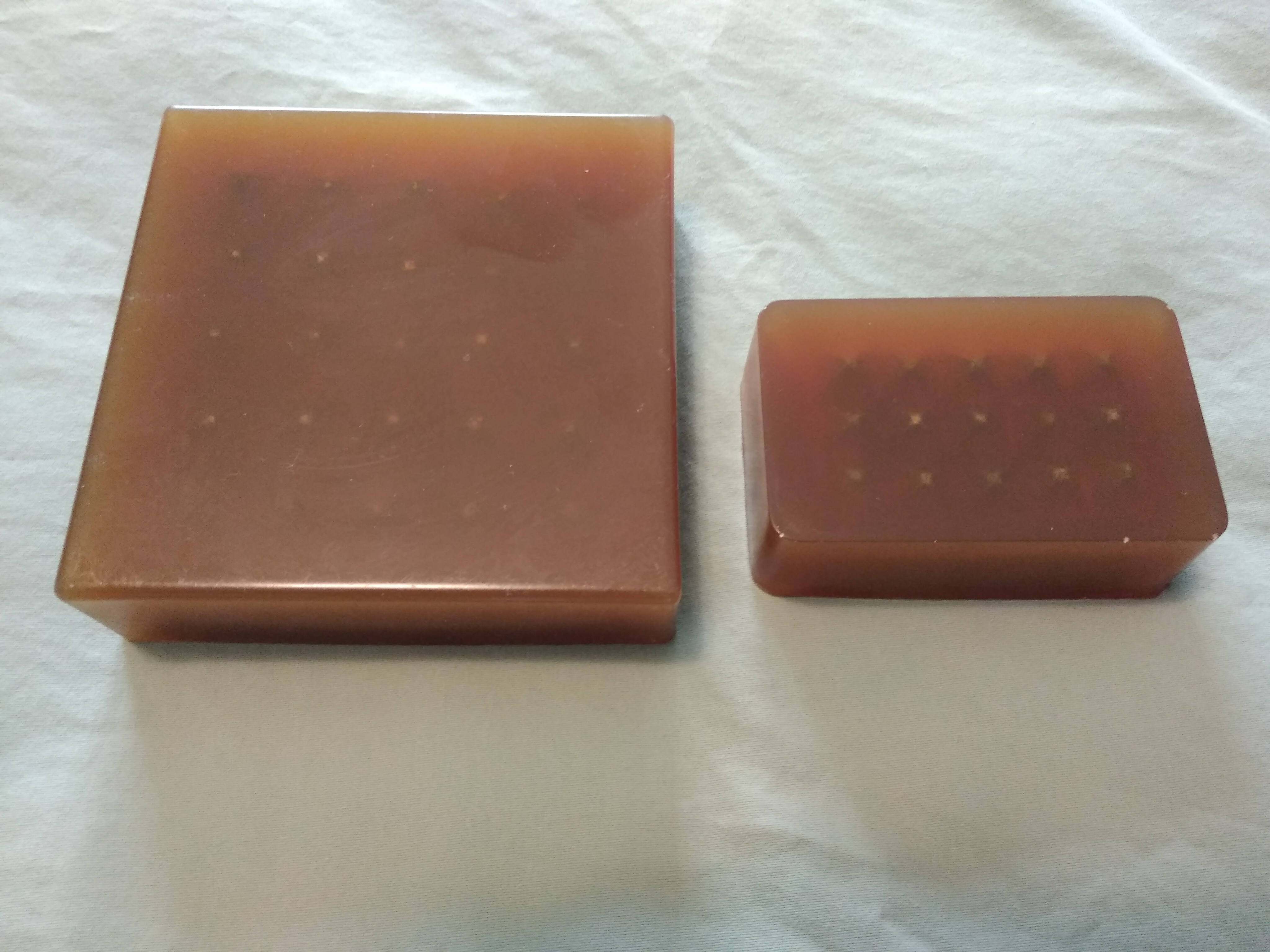 I also sold some silk screen orgone paintings. Shortly after that, I moved into a town house and was not able to make these things due to lack of space. I have since moved out of San Jose and retired, so now I have some more room to make interesting things.

A brief synopsis of the book:

Many times I had heard of the work of Wilhelm Reich. I had also read
about how he constructed his accumulators. My conclusions at the time were that there
was probably something there, but none of Reich's methods of measuring this energy made any sense to me. I do have some experience with high voltage and electrostatics, and the written results of tests with the stated equipment could all be explained with normal electrostatics.
I had also heard of pyramid power, but had not experienced anything
interesting with the ones that I had purchased. Still, I figured that there must be some unknown energy there because of the numerous accounts from witnesses.
Something finally clicked when I read the work of Viktor Stepanovich Grebennikov. It was not a fully conscious click, I just became really interested in gaining more knowledge about this different type of energy.
I went onto ebay and bought a few orgone generators. I also found the construction plans for one of these generators on the web, written by Ken Adachi. I bought some crystals and chopped up some copper wire and added some iron pyrites. These I cast into a funnel with some polyester resin. I was able to feel a weak force of some kind emanating from the top of  the completed casting. Although the force diminished somewhat within a couple of days of the curing of the resin, the effect still persists today.
A while later, I re-read the work of Viktor Grebennikov and noticed the detector device with the pencil lead suspended inside of the jar. I built one of these devices and moved the various orgone generators close to the jar. Sure enough, the pencil lead actually moved ! This is not an effect of static electricity because there is water in the bottom of the jar. Also, an electrostatic bag may be placed around the jar and movement is still observed.
I have also had some success with measuring the change in conductivity of a water column with a couple of grains of salt in the column. 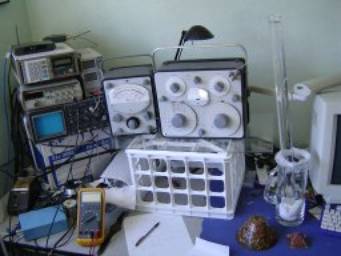 This requires a sensitive 1khz bridge and an amplifier to be able to see any change. You need to use platinum electrodes and be careful of wire lengths and shielding.

When the pencil lead began moving inside of a closed jar is when I really began to get serious about this subject. There really was something measurable and repeatable happening here. Whatever this energy was called, it was something that could be felt and measured.  Wilhelm Reich called the energy Orgone, and Viktor Grebennikov called it CSE (Cavernous Structures Effect). I have constructed devices with both names and the energy feels the same. If I place my right hand near one of the devices, I can feel a cool sensation, as if a cool breeze were blowing. My left hand feels a warm sensation. There is no air movement and there is no measurable temperature difference.
The best way to measure the energy is to put your hand around four
inches from the device. With low energy output devices, a slight coolness is felt. When the output is a bit higher, the sensation is of a cool breeze. Higher power devices produce this plus a tingling sensation as if the hand had gone to sleep.
I began by testing different materials and layers of materials. Certain
combinations of metal and organic layers were really strong generators of the energy.

This was my first discovery:
layered materials are more powerful than just casting random shapes into resin. A further refinement of this discovery was that two metals and an organic layer were required for the effect to become directional. You may test this by cutting sheets of copper, wax paper, and aluminum foil into squares (I used circles) around 2 inch on a side (or 2 inch diameter). Place these so that the order is copper foil then aluminum foil, then wax paper, then copper etc. A slightly larger diameter square (circle) of plastic wrap may also be added onto the wax paper in order to hold the layers tighter together. Place around 40 of these layers into a stack and you will feel the cool breeze-like sensation. If you paint the copper and aluminum squares (disks) with polyester resin on one side and let them cure before stacking, the wax paper/plastic wrap may be omitted and fewer layers are required. I can feel the sensation with only 4 layers of copper/resin/resin/aluminum so long as the metal layers are nearly the same thickness and the organic layer is at least twice this thickness. One face of the copper should meet one face of the aluminum with no separator, the other face of each material should see an organic (resin, wax paper, etc.).

There is an ancient Chinese technique involving the layering of copper and silver. While copper/silver is an excellent combination of metals, the omission of the organic layer makes this technique produce artworks with no orgone generating ability whatever. One has to wonder if the knowledge of the organic layer was lost at some point in history.

My second discovery was made using a combination of the evidence of pyramid power, Reich's layering clues and Viktor Grebennikov's inference that an array of shapes would produce orgone energy. I call this discovery the pyramid array orgone
breeze. This device is really powerful. A three level array of 13 pyramids per layer is so powerful that nearly everyone can feel a cool sensation along with a tingly sensation when they put their hand near the front of the device. Each of the pyramids have a height of 0.5 inch and the length of a side is 1/4 * (2 pi * height). This three layer device may be placed across the room from my bed, with a natural quartz crystal mounted in front of the middle pyramid. I wake up energized and find that I sleep much better while using this device. If it is placed too close, I will wake up many times during the night, sometimes with strange dreams. This same result was also confirmed by other people.

I constructed a ten layer device with 13 pyramids per layer, of five metal-metal-organic layers on each pyramid.  The device created an unpleasant field in the whole room where it was put together. My observed affects were a slight headache and a psychic buzzing sensation. I believe that these affects were due to the poor construction of the layers that did not allow for proper alignment of the pyramids of each layer. I took this apart and used the levels to make two three level devices and one four level device, each with a natural quartz crystal mounted so that it points away from the front center pyramid. These devices produce powerful affects, but none of the undesirable buzzing.

For the 2005 burning man event, I mounted a 4 level device (picture below) onto a bamboo pole. I carried the "staff" with me a number of times during the event. Most people could feel the energy coming out of the crystal at the top. 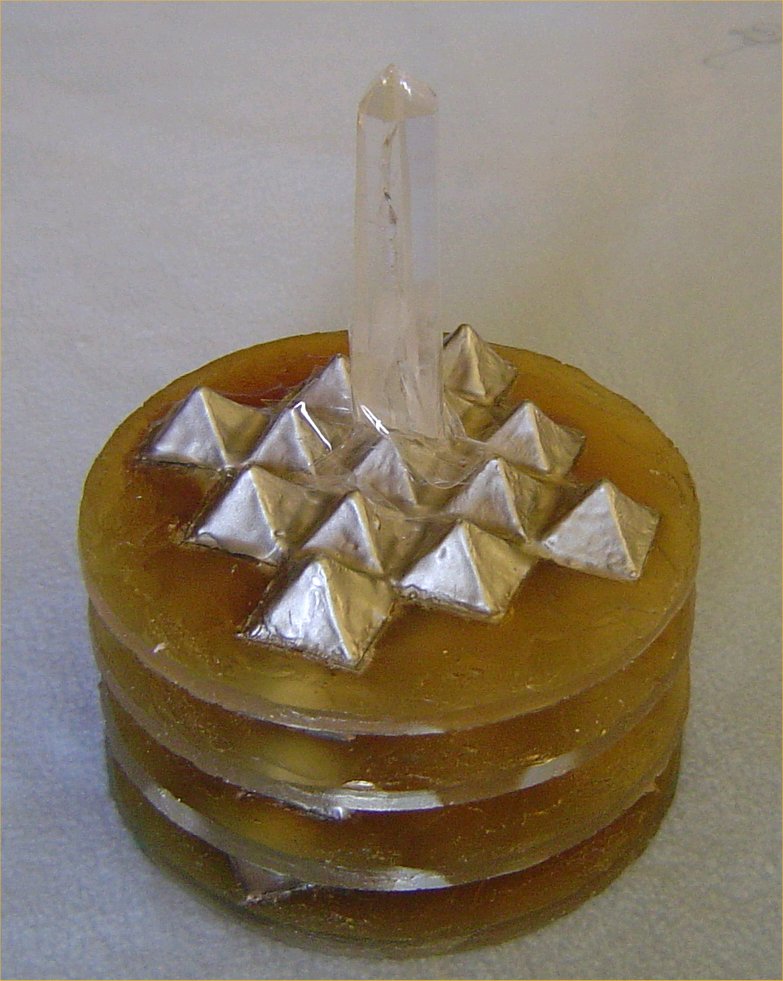 The most major discovery that I made in 2006 is that the energy is much improved by placing the device onto a limestone or plaster block. I have tried various other substances, but these work the best. It is interesting that the great pyramid of Giza was originally covered with limestone blocks.